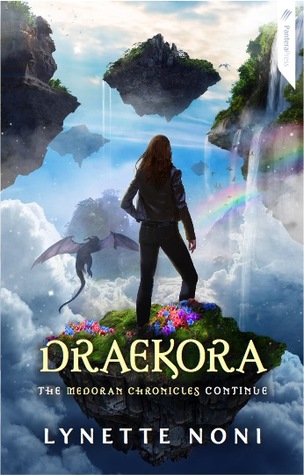 “I swear by the stars that you and the others slain tonight will be the first of many. Of that you have my word.”

“With Aven Dalmarta now hiding in the shadows of Meya, Alex is desperate to save Jordan and keep the Rebel Prince from taking more lives. Training day and night to master the enhanced immortal blood in her veins, Alex undertakes a dangerous Meyarin warrior trial that separates her from those she loves and leaves her stranded in a place where nothing is as it should be. As friends become enemies and enemies become friends, Alex must decide who to trust as powerful new allies—and adversaries—push her towards a future of either light… or darkness. One way or another, the world will change… “— Summary from Goodreads

I loved the first two installments of the Medoran Chronicles, so Lynette Noni’s third book Draekora did not disappoint. Although it had been awhile since I read the second book, as soon as I started reading I was pulled into to the magical world and was reunited with old characters I adore. The book begins with three of our main characters–Alex, Bear, and D.C.– in action as they try to find some information about one of their other friends. The action starts there and it does not let up!

I must commend Noni on her world-building skills and the tremendous amount of detail that makes the world of Meya come to life on the page. I especially loved her descriptions of this new setting Draekora. The land in the skies was described so eloquently that I could perfectly visualize the breathtaking city of the drakons. I often have a hard time visualizing the story when I am reading a fantasy book, but that is not a problem with the Medoran Chronicles.

Some of my favorite aspects of the Medoran Chronicles has been the setting of Akarnae and the library. For the past two books, we have gotten used to this setting the characters that Alex usually interacts with. However, Draekora tells a much different story as we spend most of the book with the Meyarians. In fact, there is not many interactions at all with the Akarnae characters, and as much as I wanted Alex back with her crew, I absolutely loved getting to know the Meyarian characters better (especially Nyx…for those of you who have read Draekora, you know what I mean.)

For me, this book really picked up when Alex is pulled through time with Xira. I have read time jump stories before, but this has to be one of the most creative executions. Alex is sent to past Meya where we see the younger versions of our favorite Meyarians. We get to learn SO much about this world as Alex learns how to be a Meyarian. This book also provides a ton of backstory for why things are the way they are, especially with Aven. I don’t want to spoil anything, but the way Noni ties the past and the present together is very entertaining to read. I had so many “ a-ha” moments where I was connecting the dots between the past and the present.

Overall, Draekora was a fantastic read. Once I picked it up, I did not want to put it down. This action packed novel will not disappoint.

Published by Find Me at the Library

A girl taking a journey through young adult books. View all posts by Find Me at the Library